What do you do when “Woke” culture is forced upon you at work? One thing you might do is fight back like Stephanie Kaplan did. She is the founder and voice behind Corporate Wokeplace, a website dedicated to fighting the encroaching Woke culture on the American workplace. In this episode, Jim Stroud and Stephanie Kaplan discuss lowering standards to achieve equity, skin color as a job qualifier and how companies who get woke ultimately go broke. Oh, yes, we went there. Tune in for a very though-provoking episode.

Stephanie Kaplan has worked in Corporate Human Resources leadership for  over 25 years. Her experience is primarily in Fortune 100 companies,  such as Starbucks, Walgreens and Target. Over the course of her career, she noticed a steady increase in Corporate “Wokeism.” Concepts such as Corporate Social Responsibility  started out with good intentions but then became tools of the social  justice warriors. Diversity training, that once had the goal to include  all voices, now has morphed into segregation and shaming of white  people. Employee Resource Groups, initially designed as an opportunity  for racial groups to share their culture with others, have now become  combative and discriminatory. Stephanie founded Corporate Wokeplace as a  way to fight back against the insanity in Corporate America.

In America, we lock up people for political reasons. It sounds obscene nevertheless, it is true. The freedoms we have as American citizens are evaporating before our eyes.

As part of its unprecedented investigation of the January 6 disturbance at the U.S. Capitol, Joe Biden’s Department of Justice (DOJ) has arrested and is holding hundreds of “political prisoners” in a dedicated jail under “harsh almost solitary confinement conditions” while denying them bail and the constitutional right of a speedy trial. “This is a political persecution against Trump supporters,” said Julie Kelly, a senior contributor for American Greatness. Having provided extensive investigative reporting on this issue over the past several months, she spoke with candor on the Mark Levin Show this past Sunday.

Despite the repeated mantra from Democrats and the mainstream media that the January 6 disturbance was an “armed insurrection” of “white supremacists,” Kelly clarified that “not one person has been charged with carrying or using a firearm inside the Capitol building that day.” On the contrary, “the only person who used a weapon, a firearm, inside the Capitol building, was the still-unidentified Capitol Police officer who shot and killed an unarmed female veteran, Ashley Babbitt.”

A few weeks later, today, several Republican Congressmen went to visit the facility for themselves to verify the claims made by Kelly and other reports like it. Guess what happened? They were refused entry and were eventually locked out of the facility. Check out the videos below to see for yourself.

America is no longer a free country. My heart grieves, truly. And to all those who celebrate this, remain patient. Your time will come soon enough, it always does.

Thanks for watching this video! $$$ All tips are welcome. By the way, click here to check the archives and discover what you’ve missed.

Someone sent me a clip of an influential Democrat claiming that Republicans were behind the “Defund the Police” movement. For those in the know, it was a HUGE lie that should have been reported on ad nauseum and debunked by fact checkers. However, the tepid rebuke was slow in coming. It made me wonder, who are the fact checkers that the public relies on to verify media stories? Can they be trusted? More often than not, no.

The resources cited in this video can be found here: https://bit.ly/factcheckers-js 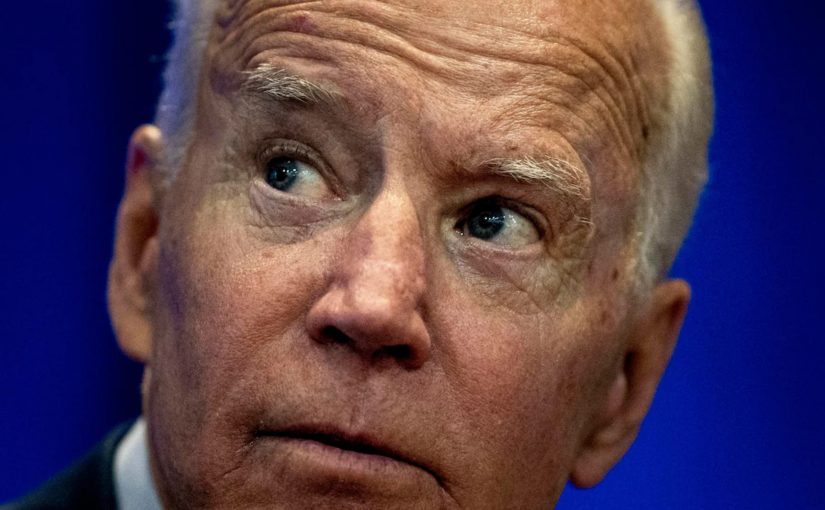 Okay, I find this very perplexing, even under the pretzel logic that the far left operates under.

This from ABC News.

Hoping to set a model for employers nationwide, President Joe Biden will announce Thursday that millions of federal workers must show proof they’ve received a coronavirus vaccine or submit to regular testing and stringent social distancing, masking and travel restrictions.

The USA government is the nation’s biggest employer so this is a VERY significant move by the Biden administration that will surely boost sluggish vaccination rates. (It will also incentivize many people to seek employment elsewhere but, I digress.) This action signals that the Biden administration is SERIOUS about reducing the Covid spread and keeping Americans safe. That being said, I do not believe the Biden administration has the best interests of the American people at heart; at least where Covid is concerned. Why? Their immigration policy tells another story.

As of June 2021, over 1,000,000 illegal aliens have crossed the USA border this year. Check out this quote from the U.S. Customs and Border Protection website.

On July 16, U.S. Customs and Border Protection (CBP) released data detailing the Southwest border encounters (formerly known as apprehensions) made for June. The data show border authorities encountered 188,829 illegal aliens last month, putting the United States at more than one million encounters for Fiscal Year (FY) 2021. June’s alarming figures are the most for that month in more than 21-years.

To put that news in further perspective, over one million people have entered the United States without being tested for Covid-19. To quote Vision times…

Migrants are pouring into the United States through the southern border due to the Biden administration’s lax immigration policies. Many lawmakers in the region are concerned that incoming groups will speed up the spread of the CCP virus. Additionally, migrants are not being tested for SARS-CoV-2.

Officials from the Customs and Border Protection department check migrants for symptoms of COVID-19 and consult with onsite medical personnel or local health authorities for further action. However, they do not conduct any COVID-19 tests.

Nor can these Border Patrol agents quarantine migrants for 14 days if they’re suspected of infection. They can only refer them to local health systems. Local governments, nonprofits, and immigrant advocacy groups administer coronavirus tests.

To put that news in further perspective, over one million people have entered the United States without being tested for Covid-19 and are being dumped in Texas border towns. To quote Washington Examiner…

A police department in Texas said migrants with COVID-19 were being dumped in its small border town after being apprehended by Border Patrol.

Law enforcement in La Joya, Texas, showed up on Monday to a Whataburger restaurant after a concerned citizen reported a family that was “coughing and sneezing without covering their mouths and were not wearing face masks,” the La Joya Police Department wrote. After employees at the establishment requested the group to leave, an officer made contact with the family. The family explained afterward that they were nabbed by Border Patrol but quickly released after agents found they had COVID-19.

Police said they later learned that border authorities passed the migrants, many of whom were COVID-19-positive, to Catholic Charities of the Rio Grande Valley, which contracted all the rooms in the Texas Inn. Officers found 20 to 30 suspected illegal immigrants were staying at the hotel. The majority were not wearing face masks, officers observed.

To put that news in further perspective, over one million people have entered the United States without being tested for Covid-19 and are being dumped in Texas brder towns and federal employees were asked to stay quiet about it. To quote NBC News…

“Covid was widespread among children and eventually spread to many employees. Hundreds of children contracted Covid in the overcrowded conditions. Adequate masks were not consistently provided to children, nor was their use consistently enforced,” the whistleblowers, Arthur Pearlstein and Lauren Reinhold, said in a federal whistleblower complaint filed Wednesday.

But at the end of their service, they said, federal detailees were regularly given written instructions from HHS public affairs that told them, “when asked, to make everything sound positive about the Fort Bliss experience and to play down anything negative.”

At a town hall with employees, a senior manager from the U.S. Public Health Service refused to share the rate of infections, explaining that he did not want the number to end up reported by the media, they said.

To put that news in further perspective, over one million people have entered the United States without being tested for Covid-19 and are being dumped in Texas border towns and federal employees were asked to stay quiet about it. Moreover, these illegal aliens are being secretly flown to locations all over the country; courtesy of your tax dollars. To quote The Blaze…

Reports that the Biden administration has been moving thousands of unaccompanied minors and tens of thousands of migrant adults — presumably without court dates — into the country amid the ongoing border crisis have circulated since February. But this week the news hit home for Tennessee lawmakers who, alarmed that the administration is seemingly doing so “under the cover of darkness,” have opted to speak out about the matter.

After WRCB-TV broke the story on Wednesday night that “Chattanooga’s Wilson Air Center is receiving planes carrying migrant children who are being bused to multiple southeastern cities during overnight hours,” the state’s two Republican senators lashed out at the administration.

“It is absolutely unacceptable if the Biden Administration is facilitating a mass migration under cover of darkness without any input or oversight from Tennesseans and the affected communities,” Sen. Marsha Blackburn wrote in a social media post Wednesday night.

Something is wrong here, very wrong.

On one hand, the Biden administration is pushing the American people to get vaccinated.

On the other hand, they are facilitating 1,000,000+ illegal aliens entrance into the country, dumping them in border towns and secretly flying and busing them all over the United States; without testing them for Covid.

Meanwhile, the United States is spending $3,000,000.00 a day not to build a border wall that would slow the influx of untested for Covid illegal aliens.

Does this make sense to you?

Something else is going on, obviously.

What do you think it is?

Truly, truly, truly you cannot judge a book by its cover! I had a long and interesting conversation with the drag artist – Lady MAGA. I walked away thinking that I met a truly courageous person. It is challenging enough to come out as gay but, to complement that by also identifying as a Conservative? Wow. We talked at length about the societal and economic impact of his decision to leave the left, patriotism, big tech censorship and the attacks on the freedoms we take for granted in America. Such a positive person despite the tragedies in his life. #Impressed Lady MAGA is one strong soul. Tune in to hear what I mean.

Ryan Woods, AKA Lady MAGA USA, is a proud Eagle Scout, America-first  Republican, Christian, and political activist. He’s an award-winning  journalist with a background in mass communication and video production.  He’s President of Log Cabin Republicans Utah and is working to save his  state from a leftist takeover. He uses drag artistry to defy the  radical LGBTQIA+ movement which pushes a dangerous agenda such as  hormone injections for children, “drag kids,” sexually explicit “Pride  Parades” and overt persecution of traditional families and religious  Conservatives. His artistry is meant to be fun, uplifting, and  inspiring—not vulgar or degrading, as is the case with most mainstream  “Drag Queens.”  Lady Maga USA hosts a weekly podcast, creates online content, organizes  events, fights for Conservative legislation, writes articles and more.