Once upon a time, before the days of Facebook, was a series of computer network systems called USENET. Usenet was (more or less) an online forum without frills as all you could do was post text and share files (mostly pictures). It was very low tech by today’s standards, but a LOT of people used them (mostly geeks and academia). Usenet was comprised of several hierarchal group headings. For example, if someone subscribed to a usenet newsgroup called “sci.math” then they knew that “math” was one of the subgroups of the main group – sci (which stood for science). Go figure.

There were all kinds of usenet groups back in the day and many of them are still in existence. Why should you care? Well,  there are a lot of usenet groups focused on jobs and companies (jobboards, really) are still sending content to them.  Chances are that if you survey them, you may find jobs that your jobseeker competitors are overlooking.

“Gee Jim,” you say, “that sounds good, but how do I go about finding them?”

“No problem, mon,” I say in a faux Jamaican accent. “Just go to Google.”

Google indexes most of the usenet newsgroups and makes their content available via Google Groups.  All you have to do is search on a usenet newsgroup name and add your jobtitle and badda-boom, badda-bing, you got yourself some jobs that you would not normally see. Check out the example below… 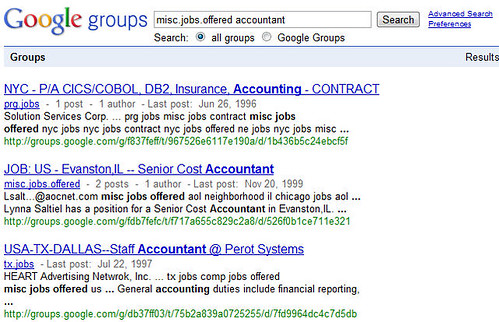 If you want to play around with this strategy a bit more, base your search on the list of groups below.

One thought on “The Original Social Network was Usenet”