Here are some hard numbers for you: 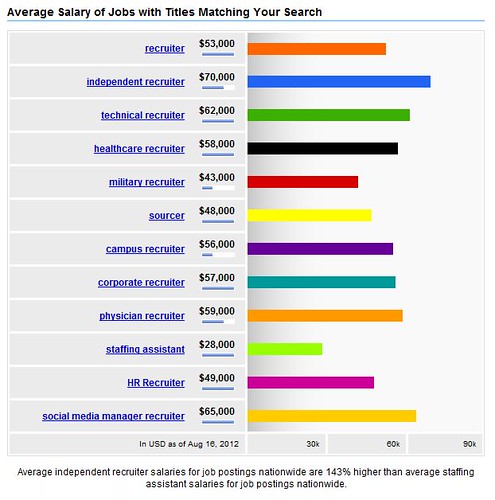 I was also curious as to how these salaries changed over the past couple of years and overall, not much, unless you were an independent recruiter. If so, then when things are good, they were good. When things went bad, they really sucked. Quite the rollercoaster ride! 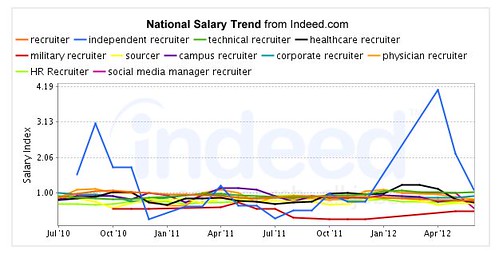 I somewhat scratch my head on the independent recruiter data. I mean, if you are truly independent, then your revenue is pretty much tied to how many clients you can keep. But I digress… Did you notice the title I searched called – “Social Media Manager Recruiter?” Those are jobs where the recruiter is involved with the employment branding via social media or, doing it all themselves. Wow. That is a full plate. Hmm… What is the trend around that job title I wonder?

I decided to look and compare it against the average recruiter salary and the average social media manager salary. Quite revealing. It seems that when you add social media to a recruiter’s duties, their salary worth increases over $10,000.00. A big jump and only a few k difference between doing that and managing social media alone.

Lesson learned? If you are a recruiter involved with social media and you want to get out of recruiting, your skills are transferable to social media management. Just sayin’…

Oh, one last thing! Adding social media duties to recruiting duties seems to be a new trend, at least being added officially to a job title. According to the chart below, it did not hit the radar until the first quarter of this year.

Okay, that’s it from me. What do you think?