Have you ever been so busy that things are your to-do list get reassigned to your “whenever I can” list? Well, this blog post was on that list. Big thanks to Joe Stubblebine for bringing it back to my memory.

@jimstroud how did your social book promotion work for you using thunderclap?

Back in July of this year, I asked for assistance in researching an online tool – Thunderclap. Thunderclap is a social promotion tool. You get people to agree to post a certain message on Twitter, Facebook, Tumblr or all of the above on a specific schedule. No one has to set their calendars, just login to Thunderclap with their Twitter account (for example) and on a certain schedule, the message will disburse. Easy peasy.

When I discovered Thunderclap I was so intrigued by it that I had to give it a go. Setting it up was a no-brainer; simply add in a message you want to go viral and get other people to sign up to spread it. The minimal goal for a Thunderclap campaign is 100. You can go over that number if you like, but if you do not reach that minimum, the message does not post. Below is a screenshot of what my Thunderclap looked like. 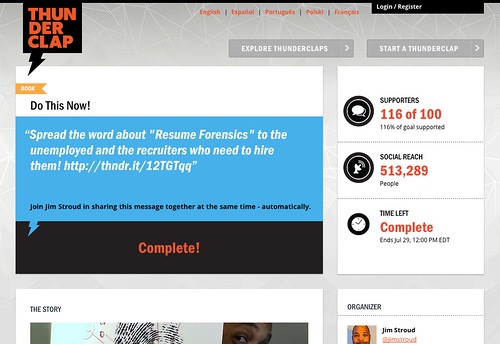 When people clicked the link that accompanied my viral message, they were sent to a landing page where they could buy my book – “Resume Forensics.”

On a certain date and time, I watched with excitement to see what would happen. Would the messages hit the net? Would people retweet and share my message resulting in millions of dollars of sales? No. However, I was pleased with the results. (Below is a screenshot of a tweet from a supporter.) 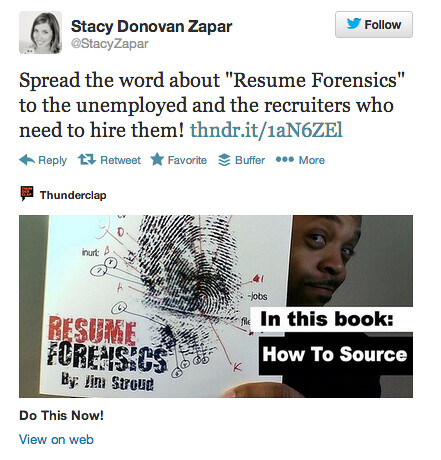 People began to notice when all of the tweets began to hit the web at the same time. (As shown below.) 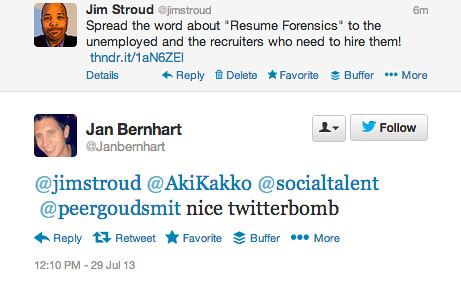 So what was the end result?

Thunderclap has a premium version with more robust stats. Among them, a list of all the people who supported my cause, more detailed statistics and a branded campaign page. The cost for these goodies is $500.00. I thought that was a bit high. Then again, its not entirely clear what I get for that price.  Is that $500.oo and I get all the bells and whistles for a year? Can I run as many campaigns as I like at that price?  If so, that would be more palatable, but still feels too expensive to me. I hope that Thunderclap makes what they are offering for that price a bit more clear.

So, would I use Thunderclap again?

Yes! I am pleased with the results despite the mistakes I made in retrospect. For example, I would add a better “call to action” to my viral message. I would explain Thunderclap more to potential supporters because I think some people still did not get it. (Although, I am not sure why.)

So, that was my experience. After reading this, will you be using Thunderclap? I am curious to know.

2 thoughts on “My Experience with Thunderclap”