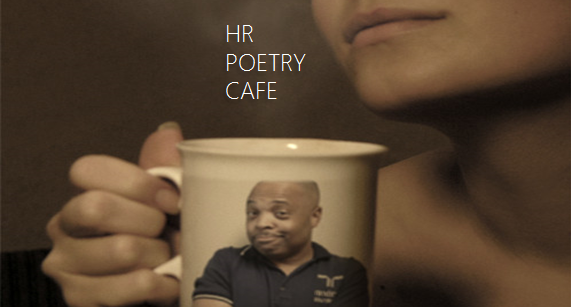 Standing on stage, the lights dim and a bright spotlight brightens my forehead. The microphone, so unassuming before, taunts me like a recoiled snake ready to strike. Resisting the urge to wipe the sweat from my brow, I grab the microphone and try to choke it with one hand. It keeps my other hand from trembling. The announcer says my name and the crowd that was chattering amongst themselves immediately silences and stares at me. I nod to the bongo drummer at the base of the stage and he starts tapping out a noise I try to listen and ignore at the same time. Clearing my throat twice, I let my HR poetry flow.

Google. Google. Google.
How great thou art.
Thine has droppeth the mic’ on recruiting.
And now we all dance to your beats.
Job boards sweating defeats
As the job seeker feets walk away… eventually.

Like Jazz, job boards dance
improvising along the way
Indeed, they be feeling the heat
but like a phoenix rising
I see ’em flying to the horizon.
It ain’t gone away,
just fighting in a different way,
I say.

But companies on that chill tip
No need for them to trip
’cause everything going their way
So what if they have to pay?
Quality of talent beats
Quantity of talent, see?
(and you can beat that drum all day)

The crowd was quiet at my conclusion. Given to self doubt, I imagined them being outraged by my speculation, countering every assertion as the raving of a lunatic or the very worse response of all… boredom. Imagine my surprise and gratification when finger snaps and toe taps turned to applause and whistles. They were digging what I was laying down and it felt good.

Here at the HR Poetry Cafe, recruiters, sourcers and HR professionals of all persuasions gather to salute and lament our industry every Friday with an open mic and free discussion of what works and what doesn’t. I return to my table and thank my co-workers for their support. My beloved employer – Randstad Sourceright is a huge proponent of innovation, so being involved in things like this is common for us. Since my poetry was devoted to the potential impact of Google’s new jobs search, my peeps harped on the issue.

“So you think Google is going to rule recruiting like they do search?” Shannon asked.

“Its entirely possible,” I replied, “even probable, unless Facebook takes it up a notch.”

Shannon nodded and I kind of smiled. She had both a laptop and an iPad open. An android phone was in one hand and an archaic pad and pencil in the other. She was writing an article for SourceCon about a new sourcing tool, while simultaneously searching for leads on 3 different browsers and taking notes on how each of the tools worked on various platforms.

“Do you ever relax?” I asked, to which she she replied.

“What do you mean? I am relaxing.”

The announcer returned to the stage and announced another act to the stage. He was tall, slim and bald; wearing a dark colored suit, with no tie, and an unassuming smile. The crowd knew who he was, so his name was not mentioned. Like everyone else, I was a big fan, so I cheered like the rest of them.

“Hey DJ,” he said, pointing to somewhere in the dark behind me. “Kick it.”

This was not poetry like I had done nevertheless, it was art. The microphone I struggled with was gone and in its place were several pieces of canvas and picture frames that looked like power point slides. Wilhelm Richard Wagner’s “Flight of the Valkyries” begins to play and the crowd cheers even louder than before. I stare on in wide amazement as he takes paint and brush and designs slides more beautiful than I can describe. As he progressed, painting slide after slide, it was clear that he was outlining a possible future where Google ruled the recruiting world.

The first art piece was comparing “Google’s About Me” to the personal branding site – About.me and how Google could encourage people to create quick profiles of themselves for recruiters to review; even going so far as to post a “hire me” button for active jobseekers. Couple that with a chat feature (that Google already has) and you have a way for recruiters and candidates to chat with one another in real time.

The second art piece accentuated Google’s “one click apply” button as the killer feature job seekers could not refuse – ever. How could they? Instead of suffering sub par candidate experiences, they fill out one form and apply to several companies at once. A perfect complement to their Resume Builder tool.

The third piece was the most remarkable of the ones shared, It was Google being portrayed as some sort of deity with multiple arms and hands. While brushing the final strokes of that piece, he also scribbled in the names of various Google properties. When he spoke, you could hear a pin drop.

“People visit job boards,” he said. “But they live on Google. Google’s machine learning algorithms can analyze your historic data and predict likely future outcomes. Imagine Google looking at your browser search history, the YouTube videos you watch and all the places you’ve been. With that much data, they can pitch the perfect jobs to you, at the perfect time and even if you ignore all of that, remember that they have targeted ads in Gmail. What company can resist advertising jobs to hyper-targeted candidates? I don’t know any.”

And with that, he literally drops the mic’ and returns to his table as enchanted fans circle him with incessant questions.

“Ladies and gentlemen, Randstad’s own – Glen Cathey,” the announcer said.

“Yeah, really,” I replied. “You know it would be so easy for Google to do all of that.”

“Yeah, yeah,” Shannon said, the gears in her brain rotating at full speed. “I’m thinking about how companies could add some code on their site or better yet… in the “robots.txt” file of their site, they could point Google spiders to their careers page and say scrape all the jobs on this page. In this way, when a company updates their own jobs page, the results are updated on Google at the same time. Companies could then pay a flat fee for all their jobs being indexed.”

“If Google dominates the search results with their jobs, its going to be extra tough on those who don’t pay to play,” she said.

“Maybe, maybe not,” I reply. “Companies could focus on producing content that attracts passive candidates. Posting an article that brings people to a company blog where they see jobs being advertised, could be a way around paying Google for search traffic.”

“Ladies and gentlemen, back on the the stage because you demanded it,” the announcer said. “Chad and Cheese!”

“Oh, I love these guys,” Shannon says as she sits.

All at once the lights in the cafe blink incessantly and on the stage are two men dressed liked “The Blues Brothers” in dark suits, hats and sunglasses. The bearded man played “Joliet” Jake whereas the clean-shaven one was Elwood. The music playing loudly in the room was “Sweet Home Chicago.”

Some say end is near.
Some say, its too late
We say no baby, time to
innovate with your
resumes

And then, out of nowhere, a guitar was in the clean-shaven man’s hands (I found out this was “Chad” later.) and he began to riff a breakdown that could not be described any other way than “epic.” My feet could not stand still. And while that was happening, his partner “Cheese” belted out advice to job boards like it was a jazz scat.

Job Boards, pre screen your candidates a la Indeed Prime . Vet your talent and save recruiters time. They will love you for it.

Job boards, you got the data, now give me the analytics so I can make informed decisions on my sourcing strategies. CB gets me.

Just as the music was slowing down, someone passes Cheese a saxophone and the rhythm picked up. I lost track of time. When it was all said and done, the clock was striking midnight.

“Wow!” I said to myself. “What a time. Can’t wait for the next event! I wonder who will be performing then?”

On the drive home, I reminisce the night…

Google’s job search initiative will have a HUGE impact on recruiting.

Facebook has dabbled in the space but, they need to step up their game before Google takes it over.

Google has a lot of extraneous data from multiple apps to inform their predictions on what jobs to push to candidates. Job boards do not have that advantage.

Job boards will have to consider additional services like vetting candidates for recruiters or selling analytics in order to retain their value.

Whatever the price, companies will pay for quality. If Google can consistently deliver the goods, job boards (as we know them) may finally die.

As soon as I park in the driveway, I snap my fingers. “And… scene.”

2 thoughts on ““Google for Jobs” and its Impact on Recruiting”