For those who don’t know me, sometimes I am distracted by proverbial squirrels. I could be reading one thing, notice something related to it and off I go down a long rabbit hole. This article is like that. Trust me though, it all makes sense in the end. Just sayin’…

Have you have noticed this increased focus on racism in America? I am, of course, being sarcastic. Racism is being discussed more today than it has been since 2004. It is also the source of much research. Check out this Google Trends chart that shows search traffic on the word- racism since 2004. 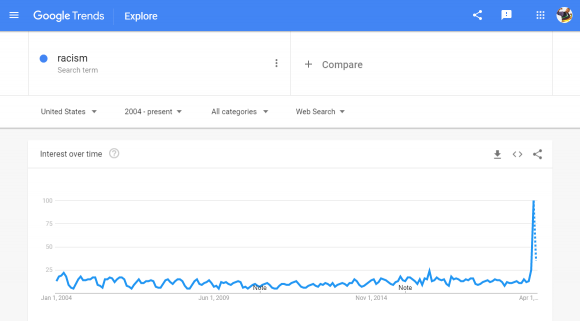 IS IT JUST ME OR, IS EVERYTHING RACIST?

And that brings me to this article before you now. I have noticed with increased frequency, how people are using the word – “racist” as a weapon. It seems to me that people are deliberately using it incorrectly to either score political points, to cancel someone they disagree with or, are woefully ignorant of what true racism is. For the sake of clarity, racism is defined this way…

This part of the definition stands out to me the most, “…usually involving the idea that one’s own race is superior and has the right to dominate others or that a particular racial group is inferior to the others.” This was heavy on my mind when someone brought to my attention recent controversy surrounding the  NMAAHC – “The National Museum of African American History & Culture.” Quite recently, they published a page entitled – “Whiteness” and on that page was a graphic illustrating “Aspects & Assumptions of Whiteness & White Culture in the United States.” The graphic is below. Do you notice anything unusual about it? I do.

A few points stand out to me. According to this chart, being “white” means…

These are universally accepted values and could be ascribed to every minority in the USA (and beyond) and not just white people. So, why did the National Museum of African American History and Culture frame the conversation this way? Aren’t these traits the basic building blocks for success? Wouldn’t labelling these traits as being part of a white supremacist dogma persuade some African Americans to rebel against them? If so, how does that benefit the African American community or for that matter, any minority community that wants to eschew any hint of racism? And if these traits are being “white” then, are they suggesting that being “black” means you are lazy, dependent on handouts and disrespectful of authority? How does it not?

The spirit behind the chart as well as the language therein, speaks to a bigotry of low expectations. There have been many commentators harshly criticizing it and I am happy to say that the chart was removed from the museum website; although the “whiteness” page is alive and well. Here are a few reactions from social media discussing it. 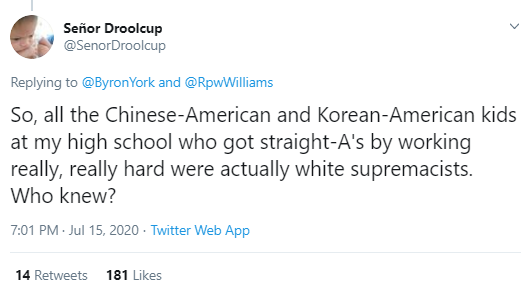 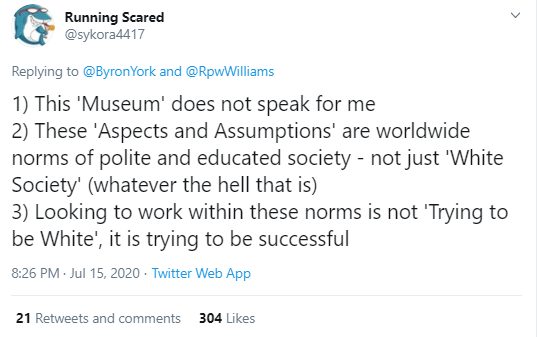 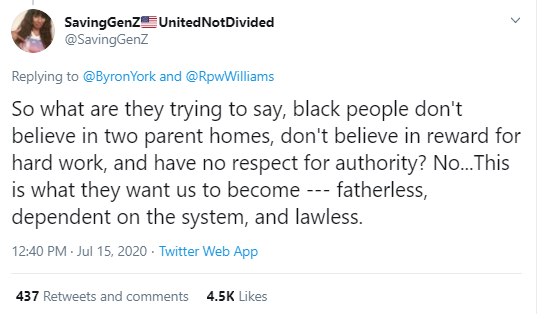 After I stepped away from the web and pondered how The National Museum of African American History & Culture was inferring how one race was inferior to another (hmm… there’s a word for that), something struck me. That chart is somewhat, and this might be a bit of a leap, a recent spin on an old evil – scientific racism. My definition of scientific racism is using anecdotal data and charts to “prove” one race is better than another. However, Wikipedia defines scientific racism this way…

I think I like the Wikipedia version better. Okay, bear with me now, as I go off on a tangent and share  some examples of how “science” has been used to justify racism over the years.

THERE IS NO CURE FOR NEGROIDISM

Benjamin Rush (1745–1813), a Founding Father of the United States and a physician, proposed that being black was a hereditary skin disease, which he called “negroidism“, and that it could be cured. Rush believed non-whites were really white underneath but they were stricken with a non-contagious form of leprosy which darkened their skin color. Rush drew the conclusion that “whites should not tyrannize over [blacks], for their disease should entitle them to a double portion of humanity. However, by the same token, whites should not intermarry with them, for this would tend to infect posterity with the ‘disorder’… attempts must be made to cure the disease.” Despite this, Rush was an abolitionist who wrestled with various contrarian viewpoints.

CLEANLINESS IS NEXT TO WHITE SUPREMACY-NESS

Alfred Ploetz’s theory of Rassenhygiene (racial hygiene) made him a popular eugenicist, especially among Nazis. In 1936, he was granted a professorship from Adolf Hitler. His book, “The Efficiency of Our Race and the Protection of the Weak,” promotes the idea of a superior Aryan and that race mixing was ruining society. Ploetz believed that the preservation of the Aryan race necessitated enforced selective breeding and the murder of children with disabilities and a ban on interracial relationships.

In the early 19th century, Sarah “Saartjie” Baartman was a Black Khoikhoi woman whose body was exploited as a display to paying Europeans. She and other Black Khoikhoi women were displayed as the “Hottentot Venus,” a term that became the basis of the theory that Black women were hypersexual and had larger birth canals. Naturalists such as Henri de Blainville and Georges Cuvier believed that Baartman’s elongated labia was scientific proof that African women had naturally wide birth canals, enabling them to give birth with ease. The theory was seized upon by white owners in the New World, who used it to justify forcing Black women to work while heavily pregnant and sending them back to work immediately after giving birth. 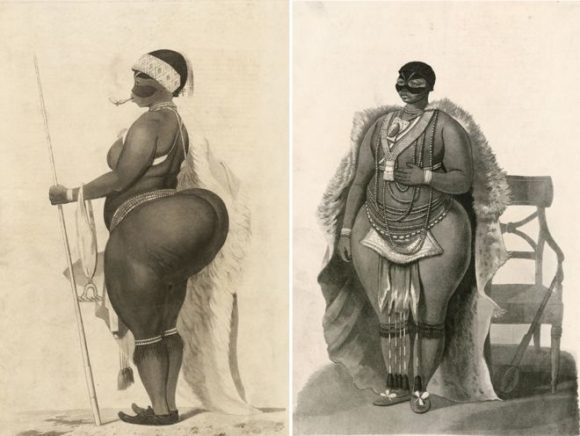 As you can imagine, his article caused an uproar at the time. Here is one such example…

Any and all pseudoscience that portends to substantiate racial superiority with “data” should be thoroughly denounced, debunked and dismissed as harshly as possible and at every opportunity. The above examples are what I would identify as blatantly racist, no matter how “justified” by science. Conversely, the following “racist” example is not, in my opinion.

I recently read an article that I mistook for satire. At first glance, I thought the article forwarded to me was from The Onion or The Babbling Bee. Alas, it was not. The title of the article was, “The Unintentional Racsim Found in Traffic Signals.” To quote…

A few months back, before Covid-19 kept us in our homes and George Floyd made us take to the streets, I was walking with a friend, her daughter, and my twin sons. My friend is White and I’m not — something I’d never given a second thought until we reached a crosswalk. “Remember, honey,” she said to her daughter as we waited for the light to turn green, “we need to wait for the little White man to appear before we can cross the street.”

I realize that White people like to exert control over nearly everything everyone does, I thought, but since when did this literally include trying to cross the street?

Part of my surprise here was a function of age. My boys are a few months younger than her daughter and we hadn’t yet tackled the “crossing the street” component of basic toddler training. But as a Black dad, I was struck by the language at play. How is it possible that well into the 21st century, parents all over Manhattan — well-meaning, #BLM-marching parents — are teaching their children to ask “little White men” for permission to cross the street? And why doesn’t this seem to bother them?

In the article, David Kauffman (the writer), does some research to find the origins of the symbol and discovered that “the little white man” is not actually a man.

A “hominoid” is how the folks at the FHWA initially described him, though later they referred to him as a gender-neutral “Walking Person’”— an icon that actually dates back to the 1940s. At that time, “walk” and “don’t walk” typified traffic signage, but began to be phased out because words could be misunderstood by increasingly globalized populations. “The use of icons instead of words on traffic signs has been a slow but steady evolution for decades because they improve universal comprehension,” an FHWA spokesperson says. “This is not a recent development.”

In fact, the Walking Person’s first major move actually took place in 1971 when it became enshrined in the Manual on Uniform Traffic Control Devices — the FHWA bible — as an alternative to the words “WALK” and “DON’T WALK.” For the next four decades or so, our little friend slowly, informally replaced its outdated predecessors until 2009; that’s when the Walking Person finally became the FHWA standard and, as the spokesperson says, “the option to use words is no longer permitted in newly installed signals.” One day soon, every traffic signal will contain the Walking Person, along with its counterpart: the bright red hand telling folks not to walk.

I honestly thought I was reading a satirical piece up to this point, a daring jab at the woke culture that is triggered by indiscernible microaggressions and perceived racism where it does not exist. However, that changed with the last paragraph.

Nonetheless, that little White man woke me up to the ways that language imparts power and privilege even upon the most banal necessities. And so, as I begin teaching my boys survival basics like riding a bike, waiting in line, and… yes… crossing the street, I’ll work hard to avoid phrases like “little White man.” Obviously “bright light person” rolls off the tongue far less mellifluously, but a bit of extra verbal labor is worth the price of not conceding our power to even one more little White man.

At this point, I honestly reflected on what he had to say, carefully balancing his observations and how the situation resonated inside him enough to pen this piece. It was then I realized that we live in two very different, parallel worlds. In my world, a traffic light is just a traffic light. I am not a victim of a system designed to safeguard pedestrians and drivers alike. In this instance, oppression is not present. Although, in the separate but equal dimension alongside me, I am constantly reminded of the black asphalt on the roads we all traverse; where only the white lines have meaning. Indeed, they divide traffic and serve as borders for walkers to move from one side of the street to the other. What does the blackness of the road contribute?  It is all an unending reminder of the value of order that whiteness brings to us all and the inconsequence of blackness. Hah! I made myself laugh with that last sentence.

All that to say…

Ascribing positive traits to “whiteness?” That is racist.

Using “science” to justify racism? That is racist.

Traffic signs as a symbol of white oppression? That is not racist.

I’ll just leave you with this…