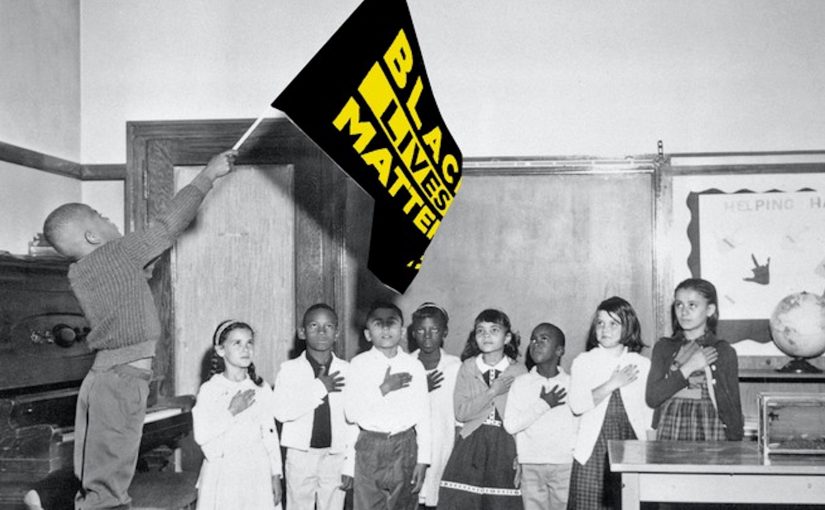 This is what Black Lives Matter is teaching our children in public schools:

The book instructs a young white reader that she doesn’t need to “defend” racism, and it presents her with a stark decision. An illustration depicts a devil holding a “contract binding you to whiteness.” It reads:

✓to mess endlessly with the lives of your friends, neighbors, loved ones, and all fellow humans of COLOR

†Land, riches, and favors may be revoked at any time, for any reason.

Hmm… I wonder what would happen if parents disagreed with this type of racist teaching? Oh, what’s this from The Daily Wire?

A group of current and former teachers and others in Loudoun County, Virginia, compiled a lengthy list of parents suspected of disagreeing with school system actions, including its teaching of controversial racial concepts — with a stated purpose in part to “infiltrate,” use “hackers” to silence parents’ communications, and “expose these people publicly.”

Do our children belong to us or the public school system? (That was not a rhetorical question.) If public humiliation will not compel parents to accept a curriculum they disagree with then there is a strong possibility that financial penalties may be leveraged. Sound far-fetched? Consider this quote from The Guardian.

It was the Monday morning before Thanksgiving when a police officer showed up on Tracie Higgins’s doorstep and handed a $439 fine to her teenage son for missing too many days of remote school during the pandemic.

And later in that same article it reads…

Republican pollster Whit Ayres: “When white liberal Democrats start talking about defunding the police, the Green New Deal, and promoting policies that can be described as socialistic, they repel a lot of Hispanic voters. In other words, most Hispanics, like most African Americans, are not ideological liberals.”

One possibility, probability, of force feeding liberal ideology on a general populace that rejects it is that they are giving strength to the conservatives opposing them. #irony

And while there is a lot wrong with today’s educators, in my opinion, there are some still striving to make a difference. Check out the video below and be inspired.

Thank God someone is thinking of the children.

Antifa is NOT a myth.

The FBI has officially designated Antifa as terrorists.

Here is a list of known Antifa members and their arrest records.

Here is a timeline of some of Antifa’s greatest hits.

That not withstanding, Joy Behar says they don’t exist.

To be fair, at one point, U.S. Representative Jerry Nadler agreed with her.

Why do some on the left support Antifa? Good question.

No justice. No peace.

This from the Washington Examiner:

Republican senators are calling on the Biden Justice Department to continue the Trump-era investigations into COVID-19 nursing home policies in New York, New Jersey, Pennsylvania, and Michigan and want the DOJ to expand the inquiry into whether any of the states obstructed investigators.

Yes! Please do not let this issue die, as so many in those nursing homes did. Their lives demand justice. I pray they get it.

You have not because you beg not

Yesterday, I talked about the border crisis and the lack of apparent leadership in squashing the issue which at a basic level is simply to restore Trump’s policies because the border was working better then than now. Absent those (obvious) changes, the plan seems to be to just ask beg the migrants not to come. Will it work? I doubt it.

Google is getting creepier to me. Not only do they relentlessly track you through their services in order to better target you for ads but they want to take it a step further. How? They are getting into sleep surveillance. Their Nest Hub wants to monitor your sleeping habits. Why does Google need to know when I’m sleeping and for how long? Hard pass from me.

So, was it really an insurrection?

An insurrection is defined as this:

The act of rising against civil authority or governmental restraint; specifically, the armed resistance of a number of persons to the power of the state; incipient or limited rebellion.

The insurrection of January 6, 2021 had no guns present. Without guns, is it still an insurrection? If not, Jan 6th could be better classified a large public disturbance verses an act of domestic terror requiring soldiers and fencing around the capitol. In the video below, FBI Assistant Director Jill Sanborn told Sen. Ron Johnson (R-WI) that no one recovered any guns during the Capitol Hill riots on January 6th.

As time goes on, I keep noticing how the media narrative around January 6th keeps unraveling. Such as, what exactly caused the death of U.S. Capitol Police Officer Brian Sicknick? The mainstream media had painted it as death by crazed MAGA Trump supporters. Now, its blowing up in their face, which damages what’s left of their credibility as the country reels from the damage done.

What’s love got to do with it?

Tina Turner bids a final farewell to her fans in a touching new film that shows how she has overcome her painful past and finally found happiness.

In the feature-length documentary, simply titled “Tina,” the singer looks back on camera for the first time at her younger years filled with struggle and pain, then the true love and global fame she found as a middle-aged woman.

That’s it for now. More tomorrow. Have you shared my blog with your network yet? Thank you, if so. If not, umm… why not? Reply and let me know.