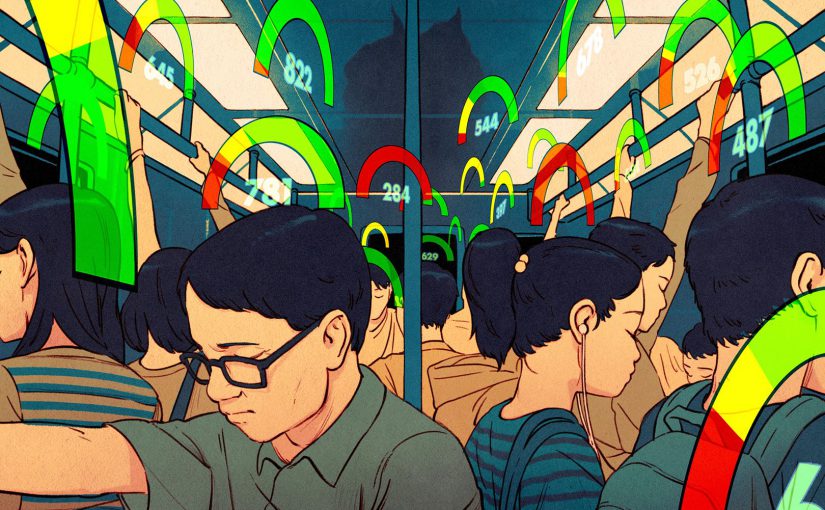 NOTE: At some point, before bed, I read through 50+ news sources and share my findings here. If you like it, share it. If you don’t, share it. Follow my blog now to support my work or to find new reasons to complain about it. My opinions are my own. All tips are welcome.

Back in 2018, I discussed China’s Social Credit Score on my video series – “The Jim Stroud Show.” I thought it was scary then and now, I find it absolutely terrifying. I’ll explain why in a moment. First, check out the video I produced in 2018 called – “The Social Credit Score in China is a Bad, Bad Thing.” In a nutshell, the Social Credit Score (SCS) monitors your every move via surveillance cameras, ranks you on your behavior then rewards and punishes you based on that score. I make predictions on the worse that could happen.

The due date of the Social Credit Score in China was 2020, although they gradually rolled it out prior to that date. Check out this video from May 1, 2019. It showcases a “model Chinese citizen” as ranked by their social credit scoring. Notice how people applaud the system and how journalists receive low scores when they write unfavorable news stories about politicians.

If Chinese citizens don’t like the program they cannot say for fear of damaging their SCS. On April 19, 2019, it was reported by The Globe and Mail that 13.5 million people were deemed untrustworthy and punished. Here’s a quote:

People deemed untrustworthy in China have been blocked from the purchase of more than 25 million plane and train tickets, as the country works to build a social-credit system designed to monitor and shape the conduct of its citizens.

Chinese courts have now added 13.5 million entries to a list of dishonest persons subject to enforcement, as authorities improve their ability to collect and share information, according to new statistics unveiled on Thursday by the National Development and Reform Commission.

By the end of March, people deemed untrustworthy had been blocked from buying 20.47 million air tickets and another 5.71 million high-speed rail tickets, the government said.

The release of statistics comes as China works to set in place a social-credit system intended to assess citizens’ reliability and ultimately to govern their ability to participate in a wide range of activities, such as exporting goods, accessing government contracts, converting currency and receiving Communist Party promotions.

The technology that China uses to pull this off is simply incredible. Check out this video on how China tracks you. [Posted: December 13, 2019] What really caught my eye in the video were things like toilet paper rationing, beauty rankings and how they are able to detect suspicious activity in large crowds.

All of this AMAZING surveillance technology made me wonder where China was on its goal for making SCS fully functional over its citizenry. I was relieved to learn that it was not yet perfected, although (obviously) very close to their original vision. And while the existence of SCS in China is scary enough, the more horrifying thing is that it is coming to America in the guise of “Vaccine Passports.”

New York Magazine commented on how the Biden Administration was considering a vaccine passport rollout. While it may sound like a welcome and convenient development to some, for me I shudder at the fine print. Check out this quote:

According to internal communications, the administration is anxious not to fumble the passport rollout, after stalled or failed efforts on coronavirus vaccinations and testing kneecapped previous responses at critical early points. “A chaotic and ineffective vaccine credential approach could hamper our pandemic response by undercutting health safety measures, slowing economic recovery, and undermining public trust and confidence,” read one slide from a March presentation from the Office of the National Coordinator for Health Information Technology. At the same time, proof of vaccination “may be a critical driver for restoring baseline population health and promoting safe return to social, commercial, and leisure activities.” There is also some focus-group evidence that vaccine passports could help convince Americans who do not want to get inoculated to sign up for a shot.

So, a vaccine passport might be used to rank people’s behavior in order to allow them to interact with society, do business and have fun in public. It sure sounds like the SCS from China to me. And just like in China. politicians would likely be exempt. Case in point, here is a quote from Jen Tsaki, White House Press Secretary.

Well, I would say the President travels, as does the Vice-President, on a private plane. That is the purview of every president and vice-president throughout American history. That is of course different than traveling on a commercial flight and going to mass events. As you know, the President is not hosting rallies, nor is the Vice-President. We take the role of being models quite seriously, but I think most Americans would recognize the difference.

The more I look at this, the more I see SCS and the more I see SCS, the more I wonder how much of China’s influence is affecting the USA’s strategies on this. For that matter, I also wondered how China was influencing other countries with similar programs? According to this Wikipedia article, Chile, Germany, Russia, United Kingdom and Venezuela all have some form of this system in place. And for sure, the United States has a version of SCS already in effect. You see it used to censor Conservatives all the time. Most recently, Facebook announced that not even President Trump’s voice would be allowed on its platform. Not a big surprise once you realize that the SCS used in China was built (in part) by bigtech giants Google and Facebook.

So, what could be more horrific than China’s SCS being practiced in the USA and assorted countries? Only this, China running a SCS program for EVERY country in the world. If you think that can’t happen, consider this quote from Newswars.

The chairman of data firm PANDA claims that China has asked the World Health Organization to appoint Beijing to oversee a global vaccine passport system, an ominous prospect given how China’s social credit score system operates.

This tweet features a video where the PANDA chairman made the comment. Please listen to it. I don’t want to be freaked out alone.

If its not obvious by now, I will make this plain.

Today, some would call this a conspiracy theory or simply, utter nonsense. In this, I would be VERY happy to be wrong. Yet, I don’t think I am. A one world government is being formed right before our eyes. Funny, I think I read a book predicting this would happen one day. I think it was in Sunday school.

Thanks for reading this. Please share it with your network. 😉