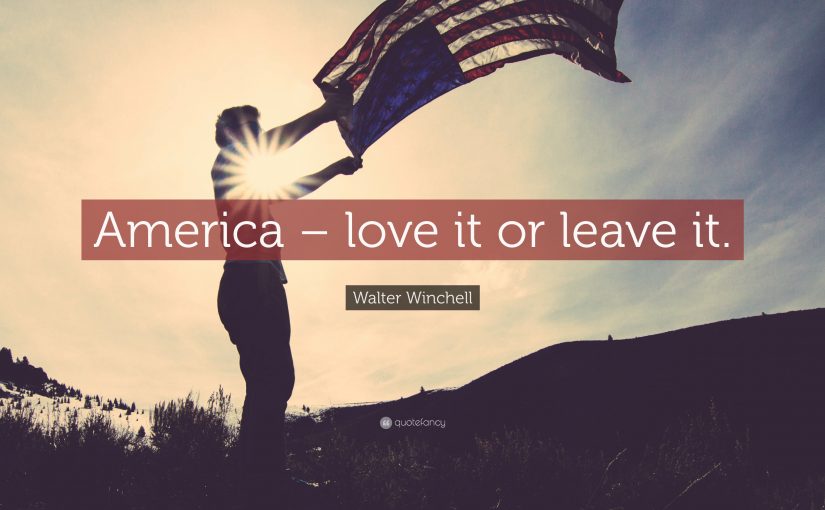 When I see things like this, I have to wonder. What do Americans gain from hating America? I see no benefit. Watch the video below and pay close attention to the mother’s reaction. It is proof that citizen hatred for our country is taught and nurtured. No one is born with it. (And do you notice how people who purport to hate America so much, never leave it?)

The wretched behavior displayed in the above tweet, brings to mind a speech by ex-slave and abolitionist – Frederick Douglass that is typically quoted on Independence Day. It is used as a bludgeon by the left to prove how evil America was and (in their view) remains.

The historic speech was given on July 5, 1852 to the Rochester Ladies’ Anti-Slavery society. It was titled, “What to the Slave is the Fourth of July?” In it, Douglass chastises the founding fathers for not resolving the question of slavery when they created the nation.

Fellow-citizens; above your national, tumultuous joy, I hear the mournful wail of millions! whose chains, heavy and grievous yesterday, are, to-day, rendered more intolerable by the jubilee shouts that reach them. If I do forget, if I do not faithfully remember those bleeding children of sorrow this day, ‘May my right hand forget her cunning, and may my tongue cleave to the roof of my mouth!’ To forget them, to pass lightly over their wrongs, and to chime in with the popular theme, would be treason most scandalous and shocking, and would make me a reproach before God and the world. My subject, then fellow-citizens, is AMERICAN SLAVERY. I shall see, this day, and its popular characteristics, from the slave’s point of view. Standing, there, identified with the American bondman, making his wrongs mine, I do not hesitate to declare, with all my soul, that the character and conduct of this nation never looked blacker to me than on this 4th of July!

When you see that quote, one would assume that this is one man speaking truth to power by condemning the country which had once made him a slave. But this is where context is important.

Allow me to say, in conclusion, notwithstanding the dark picture I have this day presented of the state of the nation, I do not despair of this country. There are forces in operation, which must inevitably work the downfall of slavery. ‘The arm of the Lord is not shortened,’ and the doom of slavery is certain. I, therefore, leave off where I began, with hope. While drawing encouragement from the Declaration of Independence, the great principles it contains, and the genius of American Institutions, my spirit is also cheered by the obvious tendencies of the age.

For further study, click here to read the speech in its entirety. Again, context is key. Please remember this the next time someone like Time Magazine, The Washington Post or Colin Kaepernick try to use Frederick Douglass’ quote as a reason to convince you to hate America.

All tips are appreciated!

When I ask for tips, how do I plan to spend the money? In addition to resources to keep my content flowing to you, I plan on buying books to further my research. The latest one on my list is “American Marxism” by Mark Levin. (Can’t wait to read this with my highlighter pen!!!)

Click here to financially support my efforts and I will be able to purchase it sooner, rather than later. Thank you in advance.