Robotic Surgeries are the future! And… they are the present. To be clear, robots are not operating on patients alone in operating rooms; at least not yet. What is happening is surgeons are operating in-person and remotely, on patients with the help of robotic arms. Some people this think is a wonderful development and wax eloquently about the advantages whereas other people are like… meh, whatever and think the traditional methods of scalpels in hand is still best. I’ll go over the pros and cons, of robots in the operating room on this episode of “The Jim Stroud Podcast.” | Special thanks to my sponsor – Supapass.app.

LINKS RELATED TO THIS PODCAST:

MUSIC IN THIS PODCAST:

Hi! I’m Jim Stroud and this is my podcast.

Robotic Surgeries are the future! And… they are the present. To be clear, robots are not operating on patients alone in operating rooms; at least not yet. What is happening is surgeons are operating in-person and remotely, on patients with the help of robotic arms. Some people this think is a wonderful development and wax eloquently about the advantages whereas other people are like… meh, whatever and think the traditional methods of scalpels in hand is still best. I’ll go over the pros and cons, of robots in the operating room, after this…

When you hear someone talk about robots in the operating room, chances are they are describing the Da Vinci Surgical System, which is a robotic surgical system made by the American company Intuitive Surgical. Approved by the Food and Drug Administration (FDA) in 2000, it is designed to facilitate surgery using a minimally invasive approach, and is controlled by a surgeon from a console. The system is used for prostatectomies, and increasingly for cardiac valve repair and gynecologic surgical procedures.

Having a Da Vinci Surgical System in your hospital was, and is, a big deal. Its almost a guarantee to get a hospital free publicity like this news report from 2009. {VIDEO CLIP: “da Vinci Hysterectomy Surgery”} Some doctors sing the praises of the Da Vinci system, often citing these 4 advantages.

While some doctors see it as wonderful (and that is a LOT of doctors, by the way) the naysayers tend to point out 2 setbacks:

From a patient care point of view and a financial perspective, I wondered to myself if robotic surgery really worth it? Which is why I was glad to stumble across this website – “The Doctor Weighs In” because in one of its articles some very interesting arguments about robotic surgeries were made and worth considering; especially if you are a hospital administrator debating on investing in a da Vinci or some similar system. The title of the article is “Is Robotic Surgery Really a Game Changer?” and here are some of the points it made:

I’m pro-robot in this instance as I think the benefits outweigh the disadvantages. My only concern however is that doctors using this technology might lose the ability to perform these types of surgery without robot assistance. And that might sound strange but ask yourself this, can you recall the phone numbers of the 3 people you call most often? If not, its probably because you are used to asking Siri to connect you or you developed the habit of clicking a name in your contacts and not dialing a phone number. Am I right? Technology is a great way to enhance the skills we already have. If they ever replace our skills to a point that we no longer remember them, then I think we are in trouble. 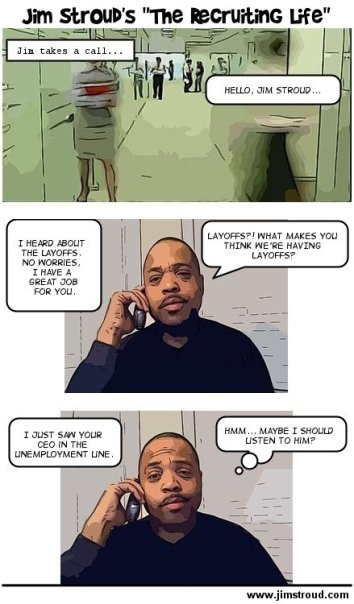 So, the other day I was in Home Depot picking up a few items when I noticed something that confirmed a trend. 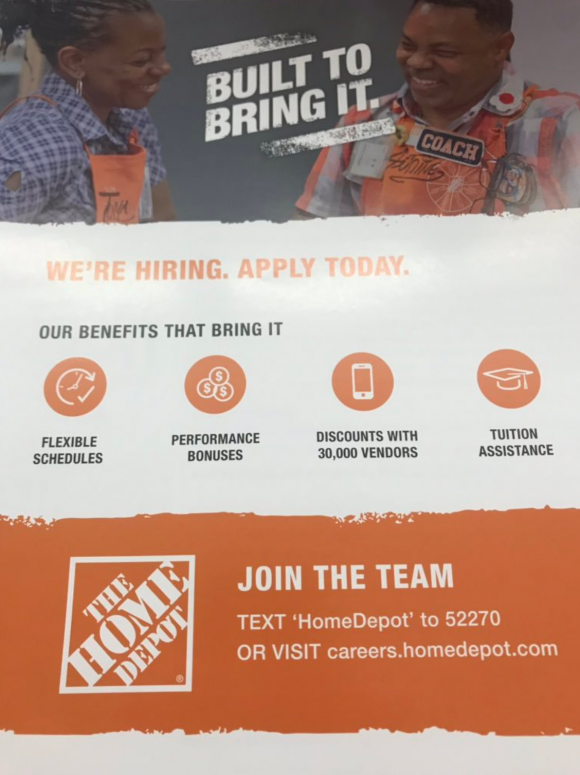 By texting a short code to a certain phone number, job seekers can opt in to receive information on opportunities at Home Depot. I have been seeing this strategy in practice for some time now and fully expect it to become standard in the very near future. To date, I have noticed in action with various retail opportunities and fast food restaurants.

What I admire about this process is that once someone has opted in to receive job alerts, presumably the system can customize the alerts to a candidate’s location. I imagine that if I opted in to learn of Home Depot opportunities, I would only get information related to the Home Depot I was presently in and/or within a few miles of my present location. I also imagine that I would engage with a chatbot and release my zip code information which would allow their system to pitch me jobs that are near my home address; something I would appreciate and applaud. Why? Let me count the ways.

Oh! While I’m thinking about it, short codes are an option with Emissary.ai. Well worth a peek if you are not already engaged with them.

AND HAVE I MENTIONED COMPLIANCE ISSUES?

A recent study found a “a striking persistence of racial discrimination in U.S. labor markets.” White applicants receive 36% more callbacks than black applicants and 24% more than Hispanic applicants. The reason behind this is often unintentional and/or unconscious biases. Consider this quote from the study I am citing.

When engaging candidates via text, biases are assuaged to non-existence. Recruiters can’t hear or see applicants via text and make wrong assumptions based on assumed demographics.

TEXTING IS TOO CONVENIENT TO IGNORE

We are currently in a great economy with unemployment at historic lows. It is an employer’s best interests to make opportunities as attractive and as seamless as possible to apply to. According to a 2018 study by Indeed.com, the majority of people currently employed are considering a job change. Consider these stats:

As encouraging as these stats may be for recruiters seeking talent, most likely they are not in a position to respond to a recruiter’s call at work; especially in light of the trend of open offices. However, texting allows for a quick and unobtrusive way for recruiters to connect that a candidate can appreciate.

OTHER STATS TO CONSIDER

According to multiple sources:

I think texting should be the industry standard for the least of all reasons, it is effective in location based recruiting, reduces bias and is extremely popular with the general population. Honestly, it is difficult to find a reason why a company should not already be experimenting with texting to some extent. But, I am open to debate. Send me a text and we can discuss it.

One of my favorite sci-fi films of all time is The Terminator. In case you have not seen these or the other Terminator films, the movies are about killer robots making war against the human race. I remember watching the film and being terrified, eventhough I knew it was just a movie. Now, I am just as nervous as I was then because the possibility of killer robots is more real than its ever been. Wait until you hear what I have to share on this episode of Jim Stroud podcast.

Links related to this podcast:

In this episode of “Its All Recruiting” (IAR), I discuss job descriptions as marketing pieces with Rob Kelly, Chief Ongiggitizer at Ongig.com. During our conversation we brainstormed a variety of ideas with one in particular being sure to cause a shudder throughout the HR world. Tune in the find out what it is and to do it yourself, before anyone else.

Rob Kelly is a 4-time CEO, author and proud father of Maverick! Rob is now CEO of Ongig, a software business whose mission is to transform job descriptions to boost quality candidates and diversity.

Rob was previously CEO for companies in the fields of dating advice, healthcare and live music.

Rob began his love of business early, attending his first shareholder & board meetings when he was 16 years old. He began his career as a journalist and has interviewed such business titans as Steve Jobs, Bill Gates and Andy Grove.

Rob is the author of the book An Enlightened Entrepreneur: 57 Meditations On Kicking @$$ In Business & Life and still loves to write.

He holds a Bachelor of Science in Finance & Economics from the University of Bridgeport and has completed programs at Stanford University, Harvard Law School , The Syracuse University International Business Program in London and Trinity College in Dublin, Ireland.