My show – “Its All Recruiting” has been on hiatus for some time but, has now returned due. In this episode, I had a great chat with my special guest – Jeff Amster, Founder of Firstscreen.  Time flew by as we discussed several things; among them:

With over 18 years of experience in recruiting for product, program and technical teams, Jeff Amster understood first-hand that resume reviews and initial phone screens had become an extreme pain point for talent acquisition professionals, hiring managers and candidates, and it was time for the industry to take part in re-imagining the recruiting model to alleviate collective frustration. Earlier this year, Jeff unveiled his next-generation, artificial intelligence powered HR platform helping to revolutionize organization talent acquisition recruiting processes by empowering candidates to self-serve their initial phone screen interviews while surfacing True Talent candidates. He plans to usher in a new age of talent matching with the commitment to leading edge AI technologies coupled with extremely user-friendly experiences.

Firstscreen is an AI automated phone interview platform empowering your recruiters to reclaim their day by enabling candidates to self-serve phone screens with digital recruiters. The platform is intended to be the first stage in helping organizations speed up the hiring process while giving candidates an easy, natural and engaging evaluation experience. At the same time, it serves to enable recruiting professionals to reclaim wasted time and re-dedicate it to increasing organization diversity, building stronger hiring manager and True Talent candidate relationships and completing new strategic analysis on their talent pipelines.

I was a guest on the HR Happy Hour discussing the state of recruiting these days. If you recruit blue collar workers, you definitely want to check this out. Description and podcast is below. Tune in for all the fun!

Sponsored by Culture Amp, the platform that turns your company culture into a competitive advantage. Your employee data tells you what’s happened in the past, but what if it could tell you what might happen next. See how with your free Predictive Analytics report at www.cultureamp.com/happy

This week on the HR Happy Hour Show, Steve is joined by recruitment industry legend Jim Stroud, an expert in sourcing, recruiting, candidate attraction, branding and more to get the state of recruting in 2019 and the overall labor market and how that impacts organizations. Jim shared his insights on how the lack of candidates in particular industries like in trucking and in caregiving are impacting recruiting efforts for organizations in these fields. Jim also discussed how soft skills like empathy and interpersonal skills are increasingly important for candidates in almost all fields and especially for those in recruiting or who are aspiring to be in recruiting. Jim shared some tips for how to best improve and develop those skills as well. Finally, we talked about some of the newer tools and technologies that are emerging and evolving in recruiting in 2019 and beyond.

This was a fun show, thanks so much to Jim for joining us.

Remember to subscribe to the HR Happy Hour Show wherever you get your podcasts.

Recently, I was interviewed by the blog – TechFunnel. Below is their description of my chat with them. Enjoy… 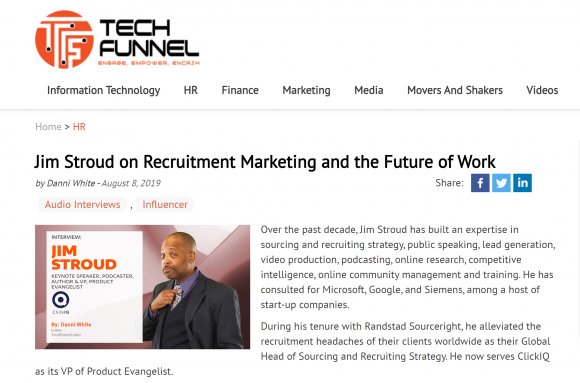 In this interview, Jim talks to us about the biggest challenges facing recruiters at the most senior levels and what can be done about it. He also discusses recruitment marketing and how employer branding plays a role in the recruitment process. Finally, Jim discusses the future of work and how recruiters must shift their thinking when it comes to a millennial workforce.

I was a guest on “The Influential Recruiter” podcast. The topic was “Content is the New Sourcing” which was inspired by my book of the same name. During the program I went on a bit of a rant about the pros and cons of a recruiter becoming an “influencer.” Maybe I talked too much or, maybe I was having my own mini-therapy session? Tune in and judge for yourself. (Click here to subscribe to his podcast!)

Here is the official description of the episode:

Jim Stroud is the author of five HR related books, produces the “Its all recruiting” podcast, [The Jim Stroud Podcast], and the video series – “The Jim Stroud Show.” In this episode, we discuss the following questions:

I was a guest on Chad and Cheese’s “The Shred” Podcast today. Listen to it now, read the transcript below or, do both. Yes, both would be good. 😉

Facebook moderators are the cops of the social network. They patrol its cyberspace for things like hate speech, murders in livestream, child pornography and anything else that can be generated by the worst examples of its global society. One such Facebook moderator was Keith Utley. He worked the overnight shift at a Facebook content moderation site in Tampa, FL, operated by a professional services vendor named Cognizant. He did not serve in this capacity alone; 800 or so contract co-workers helped him sift through internet depravity and they had the notable distinction of being among the worst performing of the FB moderation sites – according to “The Verge.”

To work as a Facebook moderator, you are required to sign a 14-page nondisclosure agreement. Keith Utley and others broke that agreement because the working conditions demanded it. Here are just a few of their complaints and apologies in advance, if you have a weak stomach.

The complaints go downhill, from there.

So, what do the workers get for the trouble of deplorable working conditions? A whopping $28,800 dollar a year salary, two 15 minute breaks and a 30 minute lunch break. They also get 9 minutes of wellness time because if you are monitoring graphic violence and child exploitation for a living, most likely you will soon be diagnosed with post-traumatic stress disorder or something related to it. In fact, “The Verge” reported on the secret lives of Facebook moderators before and cited how commonplace it was to be “haunted by visions of the images and videos they saw during their time on the job.”

So, what has been Facebook’s response? Here is a direct quote from Casey Newton, reporter for The Verge and the source for all the information I’ve been sharing. Quote…

In May, Facebook announced that it will raise contractor wages by $3 an hour, make on-site counselors available during all hours of operation, and develop further programs for its contractor workforce. But the pay raises are not due to take effect until the middle of 2020, by which time many, if not most, of the current Tampa workforce will no longer work there. Turnover statistics could not be obtained. But few moderators I have spoken with make it to two years on the job — they either are fired for low accuracy scores, or quit over the working conditions. And so while the raises will be a boon to a future workforce, the contractors I spoke to are unlikely to benefit.

The moral of the story here, I think is this, do not become a Facebook moderator. At least, not today.

Subscribe to the Chad and Cheese podcast! (Its good for the environment.)