These are interesting times. The Corona Virus has made made a significant change to the way we work, do business and live our lives. So much transition is such a short period of time can be overwhelming, which is why we at Proactive Talent have created the following free resource:

“OMG! The Coronavirus Has Flipped My Office Upside Down! (What do we do now?)”

Please share this information with your LinkedIn network. You can also download this guide and leverage for your business and office needs. It is intended to be a valuable resource for all concerned. If there is something we’ve missed, please add a link to it in the comments of the original post.

Thank you in advance for your support. We really want this to be helpful.

“OMG! The Coronavirus Has Flipped My Office Upside Down! (What do we do now?)” from Jim Stroud

When the topic of automation is brought up in relation to the job market, the arguments tend to repeat themselves. One view is from the doomsayers who suggest robots are going to steal all the jobs away with the contrarian position being somewhere between a robotopia (where machines do all the work and humanity is sustained on a Universal Basic Income) and an Iron Man scenario where tech and humanity operate simpatico. I think to some extent all workers will become Tony Stark with our iPhone or variant wearable technology augmenting our intelligence. If that seems far-fetched, consider the last time you dialed a phone instead of commanding Siri or tapping the name of a desired party. (God help us all if we wander off lost on a roadtrip without the aid of GPS.) As the new status quo of office robots and automation encroaches, it strikes me as odd that no one seems to be voicing the next great worker concern. If automation can eliminate certain tasks for a certain worker by X percent then, should that worker have his compensation reduced accordingly?

I do not have a background in benefits and compensation analysis but, I think that such is an argument that will be made in the near future. Lately, I have been thinking about this from various angles. Pardon my ramblings as I share my thoughts.

From the employer’s perspective, I consider the amount of money spent on technology designed to make my workforce more efficient. If the tech does as intended and reduces the daily grind by so much, is a reduction in future salary fair? Conversely, if workers are doing less of one type of work, does that mean they will be doing more of another? If so, would it be unfair to reduce their salaries? How would one qualify a percentage of work in order to make a right assessment?

DOES IT AFFECT THE VALUE OF THE EMPLOYEE?

If there are tasks that can be safely delegated to robots then, it stands to reason that the work automation cannot conquer is of higher value. Does that higher value offset the percentage of work done by robots? I wish I knew. What I do speculate though is that the more work is automated, the value of the worker decreases if they do not acquire new skills. This is why I think the most competitive companies are those with the most robust training organizations. In addition to improving your existing labor force, it also improves retention. A quick aside…

According to a recent survey by the career platform The Muse, 58% of its largely millennial user base said they plan to change jobs this year. What they are searching for is learning and growth opportunities, as well as work-life balance, according to Muse co-founder and CEO Kathryn Minshew.

IF AUTOMATION REDUCES SALARIES, WHAT THEN?

I think if automation reduces salaries across the board, there will be an even more significant upswing in gig workers. Said gig workers will become a key option to companies who do not have a robust training program and cannot remain competitive waiting for the upskilling of their workforce. As an example, consider India which is predicted to have a highly significant non-employee workforce for its companies over the next few years. In fact, to quote The Economic Times…

The use of non-employee talent, or employees not on the rolls of organisations, is expected to grow dramatically in India over the next three years, according to the findings of a survey by global advisory firm Willis Towers Watson.

At the same time, full-time employees’ share of the total workforce is expected to drop 3.3 percentage points in India and 4.1 percentage points globally over the next three years, stated ‘The 2019 Pathways to Digital Enablement Survey’.

“There are two things increasingly happening in work. First is work is increasingly being pulled out of the organisation and being done elsewhere and then being brought in. The second is the growing plurality of means of getting work done,” Willis Towers Watson managing director Ravin Jesuthasan said. “Today, business leaders have a lot of choices on how they get work done. Automation is just one of the different options for them. The various other options could include sending work to talent marketplace, tapping gig workers, using volunteers, etc.,” he added.

The non-employee workforce in India that is seen growing in the next three years includes free agent workers (15%), parttime reduced hour (32%), worker on loan from other organisation (3%) and free agents on talent platforms (230%), the survey said.

I think that HUGE percentage of free agents being utilized by talent platforms is in response to the demands of worker flexibility and the booming gig economy. As such, I would not be surprised if more talent platforms debuted around HR freelance jobs or some other niche.

Another possibility resulting from automation reducing salaries, is the likely trend of companies tying year-end bonuses and worker performance evaluations to future potential. Traditional models postulate that if you did a good job last year then you will do a good job next year so a raise will reward you and give incentive to remain. But if automation is reducing the need for certain skills and reducing compensation to boot then, wouldn’t it make more sense to rate performance based on future potential? IBM thinks so. Using artificial intelligence (AI), Watson Analytics looks at an employee’s experiences and projects to infer the potential skills and qualities each person might have to serve IBM in the future. Watson also scours IBM’s internal training system to see if an employee has gained new skills. Managers then take Watson’s assessment rating into account as they make bonus, pay and promotion decisions. One more quote from the Economic times…

“Traditional models said if you were a strong performer in your current job that was the singular way that you got a promotion,” said Nickle LaMoreaux, vice president for compensation and benefits at IBM. “Well, we certainly still care about performance,” she said. But that now includes hypothetical future performance, too. IBM claims Watson has a 96 percent accuracy rate, as compared to IBM’s internal analysis with HR experts. The company spot-checks employee performance against its predictions.

Historically, employers used past accomplishments as the sole metric for compensation decisions, premised on the idea that the past is prologue. The method worked when job tasks stayed relatively static over time, but “the half-life of skills is getting shorter and shorter,” said LaMoreaux. What employees could do yesterday matters less than what they can potentially do tomorrow

Okay, just in case I lost you in my verbosity, let me sum things up like this…

Of course, I could be way off base. What do you think? Leave a comment below.

DOWNLOAD MY FREE WHITEPAPER: “The Economy is Good. Is That Bad for Business?”

DESCRIPTION: In Today’s Robust Economy, It Has Become An Uphill Battle For Companies To Find And Hire Top Talent.

I partnered with Hiretual on a new white paper ‘The Economy Is Good. Is That Bad For Business?’ where I review common recruiting problems, how to overcome them in a tight labor market, and strategies to retain your current employees and hire loyal workers. Download your copy now! Also, please like, share and comment on this post. Thank you in advance.

SPECIAL NOTE: Be sure to read my bio on the landing page where you download this whitepaper. The last paragraph may be of interest to some recruiters out there. *wink-wink* 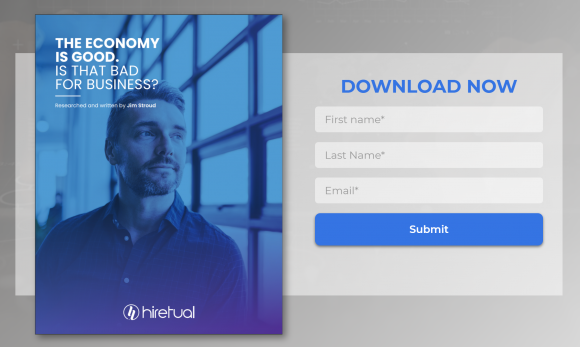 A low employment rate is great for the USA economy but, extremely challenging for companies on the hunt for talent.  When talent is scarce, companies have to be creative when finding qualified, interested and available candidates. In episode 2 of the “World of Work” series, three case studies of companies who successfully experimented with their recruiting strategies are explored. It is sponsored by ClickIQ, the award winning, automated job advertising platform. Sources cited in this podcast can be found here.

This is the premiere episode in a series called – “The World of Work,” a new podcast series sharing trends and developments in today’s labor market. The topic in this first episode is “Blue Collar Workers are Hard To Find.” It begins with a discussion of the talent scarcity in the blue collar industry and continues with an exploration of innovative ways companies have filled their open positions by finding talent in atypical places. It is sponsored by ClickIQ, the award winning, automated job advertising platform. Sources cited in this podcast can be found here.